The caboose is jam packed with a moose, two flooz’s for which you can choose, ya boy PBM’s jelly juice, and maybe a noose if you’re into that sort of thing! Welcome aboard another edition of Pig Skin Particulars, rail riders! Prone Bone Malone is riding high after his men, the Stickmen Deluxe, thumped ATrain’s Fuzzy Hat Clan in the brutal fantasy football entity that is The Holy War. 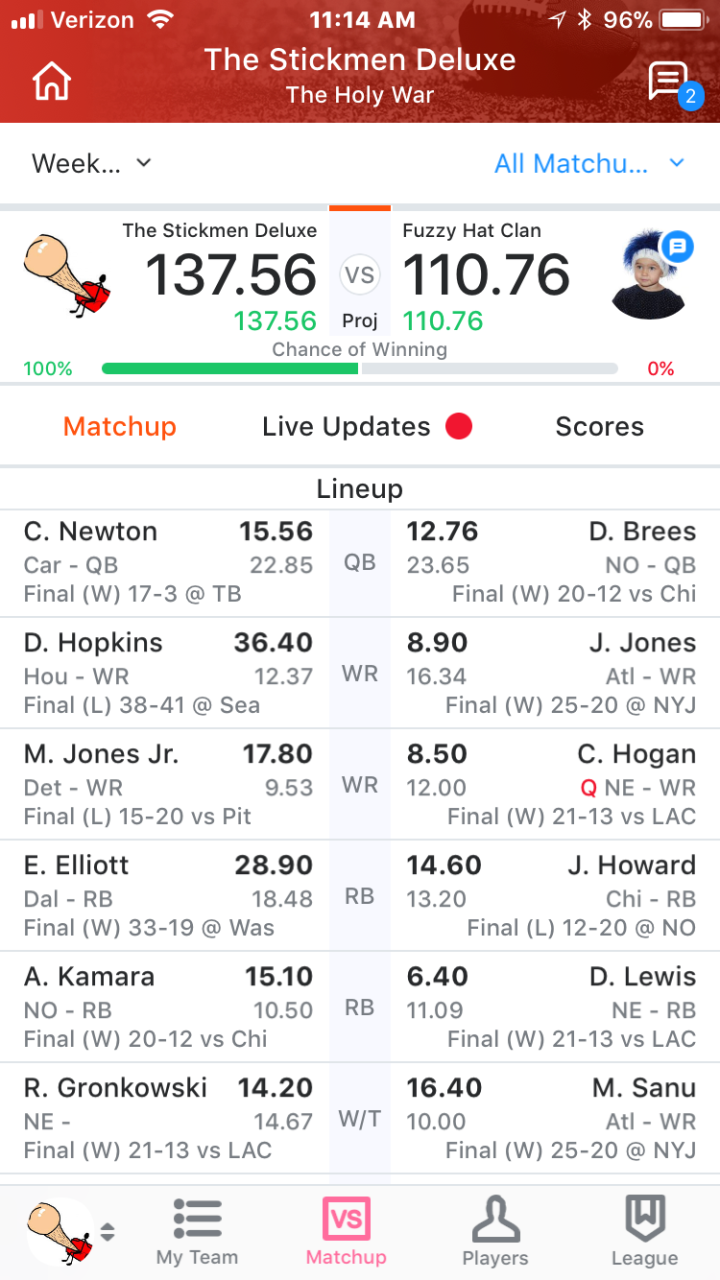 We’re starting to get a handle on this NFL season, family. Our NFC pick, The Eagles, is far and away the best team in that conference. We were extremely high on the Steelers last week, and that hasn’t changed having watched Smith-Schuster becoming the second best black Jewish guy to ever play professional sports (h/t Amare Stoudemire). Our boy Deshaun Watson looked young but awesome in Seattle, and that’s where we shall start today’s recap.

Young Dirty Deshaun was lights out yesterday. Nuk/Fuller are the best 1-2 in the league. Clowney is starting to look like the destructive force they hoped he would be. Lamar Miller won’t kill you, especially when’s he getting the Harper’s.

The only problem, which we foolishly neglected in last week’s power ranks, is OB. Now – the Texans had some media created controversy this week and by all accounts, he did fantastic in simmering that crockpot of horseshit (“inmates running the asylum/prison” is an expressions, fuckos – don’t make all expressions racist – that’s not ok). But for him to let Paul Richardson walk all over this secondary when Seattle literally can’t buy a yard on the ground was absurd. Just awful management of his team on the defensive side of the ball. I still think they win the AFC South, and if it wasn’t for Billy Boy, they’d be a brutal out for any team in the playoffs. Alas, they’ll probably lose in the wildcard round until they find Young Dirty a real coach.

SUSPENDING ZEKE NOW WOULD BE A TRAVESTY

Ezekiel Elliott – young thundacat – THANK YOU. When you are playing football like you are right now, you are by far the most fun dude to root for that I’ve had the privilege to do so. Zeke is off the chain right now, family. He is hitting holes with Prone Bone efficiency not seen since prime Tomlinson. The Cowboys offense is starting to fire on all cylinders, and if they continue to play this way, it will make the Eagles/Cowboys matchup(s) fucking incredible. If he does have to serve, wait until next season. To upend his current stretch of play would be harmful to the league in a massive way, as the Cowboys are starting to look like the preseason favorites they were, and not like the rest of the junk in this mediocrity filled tarpit we call a professional sports league.

PRAYERS UP TO ATRAIN, BEARS GO DOWN

The Zach Miller play…god damn it.

That was a catch. That was a catch made by a man who broke his fucking leg while coming down with the ball. Fuck the refs of this league, and fuck the announcers who ignored the effort Miller made to HOLD ONTO THE FOOTBALL WITH A BROKEN LEG. Gross injury – even grosser outcome.

He  STINKS! The Panthers are a joke of a team right now, and that says miles about how big of a joke the Bucs are. Here are the power ranks after week 8:

Jared was on a bye week this week and wouldn’t return my calls. Sent me a few gibberish texts. He’ll be back next edition of the particulars. Enjoy your Monday, fam.