One thing is perfectly clear from my gambling picks in the semifinals, I’m not digging deep enough. I need to go beyond the X’s and O’s and really see who has the true advantage when it comes to Alabama vs Georgia.

Alabama is the Crimson Tide the mascot, however, is an Elephant. For a detailed explanation of how that came to pass see here. Elephant picks up 500kg water buffalo just to show the kids how it’s done. Photographer watches in awe. Via Reddit.

Alabama has the Advantage here regardless of if we are going with “Crimson Tide” (which sounds super badass) or The Elephant…both are beating out The Bulldog. If you ask me Tigers, Wildcats, and Bulldogs are all pretty basic mascots. The SEC has three Tigers (LSU, Mizzou, Auburn) one Wildcat (Kentucky) and two Bulldogs (Mississippi State & Georgia) Way to be original guys. The Elephant is one of my favorite animals, its big smart and mostly gentle, but do not fuck with it or it will stampede you into dust.

Having a Coat of Arms is pretty badass, it was news to me that Alabama had their own Coat of Arms. Then I saw it. At first glance, it looked cool, similar to a European coat of arms. Some of the other states have coats of arms but none of them look as authentic as Alabama’s.   Then I took a closer look and it’s actually a little problematic.

It’s got a British and a Confederate Flag quartered in the escutcheon. Super Patriotic. The Latin at the bottom translates: We Dare Defend Our Rights. What’s at the crest I can only assume is a slave ship carrying some of the state’s first immigrants into Alabama. Not the best look. When you consider they adopted this in 1939, it appears, even more, a try hard move.

The State Seal of Georgia is pretty classy if you ask me. Zero references to being the loser in the American Civil War. Pretty much just three solid ideas wisdom, justice, and moderation. Then we have a little fellow sword drawn ready to defend the constitution. Well done Georgia, you managed to not put a slave ship on a state symbol.

Butterflies are cool to look at but never forget how it used to be a gross caterpillar. Honey Bees provide us with honey. We don’t really have any other way to get it. We need bees in a big way. Bees are super important to the ecosystem. How? Something about pollen I don’t know I’m not a scientist. Google it.

This one isn’t fair. Saban keeps his dome in perfect order. In many ways, the Alabama team is a direct reflection of Nick Saban’s personal appearance. Organized down to the last detail. 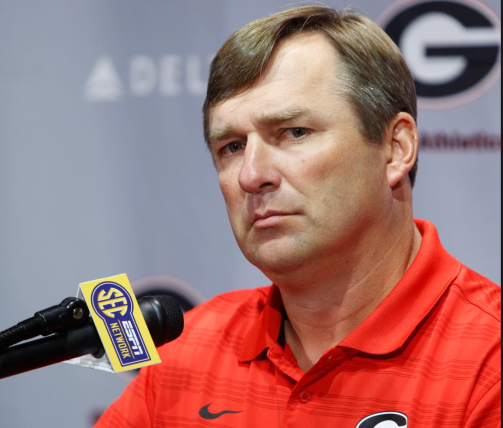 Georgia fans are hoping that his hair is not a reflection of how the team performs. So far it hasn’t been a problem but as we all know bad hair has a tendency to rear its ugly head during championship games.

As anyone can see no matter how you break it down these team are very evenly matched. History and my head is telling me that Alabama wins this game and covers the point spread but if Georgia brings it’s A game and can get an early lead, then I would not be shocked at all if the Bulldogs pull the upset. It would be sweet Irony if Fromm got knocked out of this game and Eason had to come in and win it for Georgia. I’d love to see Georgia win but Saban is the New England Patriots of College Football and I think he gets another title.