Dogs are the best. I’m not sure where we as a human race would be without these faithful creatures. They aided us during our hunter/gatherer phase helping us track down the big game we needed to survive. They have been shot into space, starred in films and television, been side by side with soldiers on the battlefield. During 9/11 they helped find and rescue survivors. They truly are man’s best friend.

I could gush about canines till the cows come home but my readers don’t have the longest attention span so let’s start giving some shout-outs.

Old Hemp was the Original Border Collie, Border Collies being my personal favorite breed for their smarts and boundless energy. Old Hemp changed the way Border Collies herd, they used to be loud in their herding until Old Hemp came along and introduced his version of Blue Steel, Old Hemp could herd with his stare, he worked quietly but with extreme intensity. His herding ability was considered flawless. He is the 9th dog listed on the International Sheepdog Society stud book, a book containing over 300,000 sheepdogs. He fathered over 200 pups and his offspring were renowned herding dogs in their own right. You get a bone Old Hemp, Good Boy. 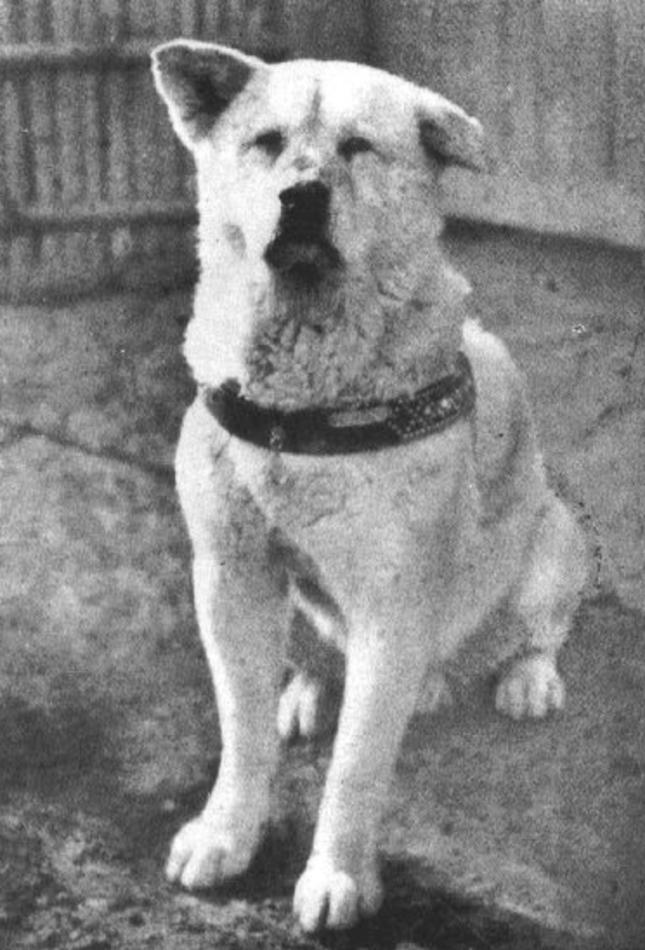 The story of Hachiko is a truly remarkable one. In 1924 a Japanese professor took the golden brown Akita as a pet. Hachiko would meet his master at the train station every day without fail such. In May of 1925, Professor Hidesaburo Ueno suffered a brain hemorrhage and did not return home. Every day for nine more years until Hachiko’s death the Akita would wait at the train station hoping against hope his master would return. I get a little teary-eyed thinking about what a good boy Hachiko was, you get a treat Hachiko, good boy!

Shout-Out Lamby. You are in a Better Place Award.

Lamby was the source of much controversy when her owner Lena Dunham aka the annoying bag of milk from HBO’s Girls, surrendered her to a shelter in Los Angeles. Normally an owner surrender isn’t a huge deal except that Dunham made a huge deal about how rescuing a dog changed her life, to the point the New Yorker actually ran an article about it.

(Is there a more pretentious piece of publishing than the New Yorker?)

If you were able to read that article beginning to end and you didn’t vomit hit me up.

Dunham said the dog had behavior problems and real issues, she made it sound as if she took in a real problem case rescue dog. The Shelter she surrendered Lamby to was able to confirm that Lamby wasn’t doing very well.

However…The shelter that adopted Lamby to Lena in the first place denies much of the problems Lamby was claimed to have had. The original shelter said if the dog had the issues Dunham described they wouldn’t have adopted Lamby out.

Then there is the fact that none of Lamby’s behavior issues is a problem with her new owner.

Bottom line Dunham is a shitty dog owner, and like a typical millennial accepts no responsibility for it and in fact paints herself as the victim. Lamby trust me little fellah you are in a better place enjoy it, buddy. Sorry for what you had to go through.

Barkley aka Little Peet aka Peet Beetle aka Buttermilk Biscuit aka Bagel-Dog aka Little One aka Best Friendest aka White Lightning aka Frizz-Peet aka Direwolf-Dog aka Barkley-Bean aka Beany-Baby aka Smoochie aka Barkle aka The #1 Draft Choice aka Angel-Dog aka Squeaky Peet aka The Little Gentleman……I’m telling you the sheer number of nicknames my dog has is unreal. That’s what happens when you are a really good boy.

Let me gush about my Lab/Border Collie Mix.

He never chewed anything that wasn’t his even as a young pup. My previous dog Andre literally ate my bed while I was at warp tour.

He learned to bring in the newspaper with almost no training.

He has never been given a bath, yet never seems to smell bad at all. He is a very clean dog and he naturally smells like the chocolate popcorn they serve at Cinerama. (shout out Cinerama best theater in Seattle)

His fur is as soft as chinchilla and he likes to snuggle up with his best friends when he’s not trying to get you to play.

If you are part of my dog’s pack he will defend you with his life, he is a brave and loyal member of my family and he has never let me down….except for the one time he ate my Adderall and was about as cracked out as a dog can get. (I said he never chewed anything that wasn’t his, well this was the only exception, I guess he learned his lesson.)

Multiple times he alerted me to things I was burning in the kitchen.

I accidentally trained Barkley Pavlovian style, I would always put on music when we would play in my condo, after a time he associated music with play now anytime I put on music or even start humming a tune, the bagel dog comes trotting over wanting to play.

Saturday’s are for the good boys.

One thing that makes college football so much better than pro is the pageantry associated with Saturday’s big games. Living Mascots like Dubs add to the pageantry of college football. Who can forget when UGA tried to take a bite out of an Auburn Tiger who had the affront to score a TD between the hedges.

There are so many amazing dogs this post could go on forever, but it’s not going to I’ve got other blogs to blog. ATrain Out!