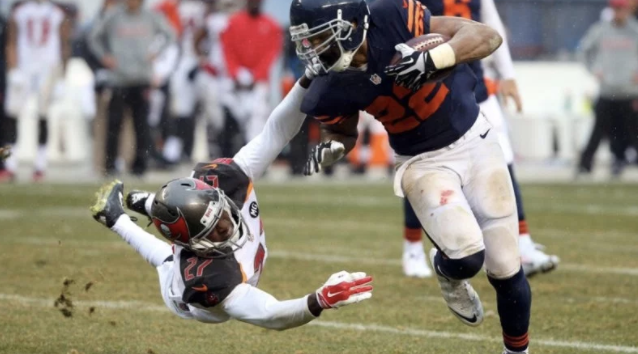 Matt Forte decided to call it quits in the NFL after 10 seasons.

As a lifelong Bears fan, I’d like to get serious for a moment because Matt Forte is one of my all-time favorite football players. Matt Forte was an easy player to root for. He was the kind of player that always did his job, Bill Belichick would have loved him. There was no part of his game that was lacking as a running back, in many ways he was the prototype for a 3-Down back in the NFL.

Forte didn’t have blazing speed, but he had a burst that he knew how and when to use. He could make just about any single man miss in the open field and he could do it without slowing down. He was good in pass protection but he was a far bigger threat when he got involved as a pass catcher. Forte isn’t going to retire with a Championship ring, he was never an MVP, but he does hold one NFL record. The record for most catches by a running back in a single season (102). Breaking the record held by Larry Centers (101). Forte’s accomplishment was all the more special because he did it in a season in which he rushed for over 1000 yards. Making him the only player with 100+ catches and 1000+ rush yards in one season. His threat as a receiver both in the screen game and down the field made Forte a special kind of RB.

I follow the draft every year, I am an NFL draft junkie. The 2008 NFL Draft may have been the one I followed the closest. I had just moved to Seattle, I didn’t know anybody, so I buried myself in draft magazines and internet articles. This draft was especially exciting because the Bears were in need of the “sexy” positions. Wide Reciever, but especially running back. Cedric Benson had been a bust and it was time for someone else to tote the rock in Chicago. Not only did the Bears need a running back but this draft, in particular, appeared to be loaded with running back talent. Let’s take a look back… People forget a white browns running back drafted 226th was on the Madden cover.

When the pick came to the Bears I was actually thinking they would draft Ray Rice, who I had watched at Rutgers and thought would be an excellent NFL RB. When the pick came up Forte I went back to my magazines to read all the blurbs. He seemed solid on paper but I had never seen the Tulane RB play for real. Two preseason games in and I was sold we had our RB of the future. I drafted him in fantasy football his rookie season and won the total points title for my league. He would win me another fantasy title later in his career. I was pretty keen to draft him when I could. He was never the best RB in the NFL, but he was always a very solid player with a very high floor.

I have a road white #22 Bears Jersey in my closet. Forte was my guy. Atrainsports wishes you and your family all the best going forward, buddy. Perhaps behind the booth? We can do better than Charles Davis. A-Train Out.