First, let me say I hate how they do the Oscars in regards to the 2018 Oscars are actually awards for the movies of 2017. It’s confusing, so when I say I want to talk about the 1996 Oscars, that means the films released in the 1995 calendar year. I firmly believe that the high watermark of American filmmaking was in the years of 1993-1995. Hollywood was turning out a lot of great films during the early half of the 90’s. Yes, there was a lot of garbage, but it also produced many classics that have long stood the test of time.

I want to start at the 1996 Oscars to point out despite how many thrilling and fantastic films were put out the Academy managed to bungle it up pretty bad in their selections. I think 1995 simply put out too many good R-rated crime/drama movies that the academy didn’t know how to pick between them. (They ended up not picking any)

Let’s go back to when Biggie and Pac were still alive and little A-Train was a burgeoning film buff. 1995.

Braveheart and Apollo 13 were fine movies to nominate I guess. I like Braveheart a lot more than Apollo 13 despite the fact that it’s not at all historically accurate. Braveheart was a pretty epic movie and I’m ok with it winning. Apollo 13 probably didn’t deserve it’s nomination either when you see the competition. Babe, Il Postino, and S.A.S. please get out of here.

Where the fuck was the Academy on Heat? Heat is a classic. DeNiro and Pacino. Great Script, an all-time great heist scene, two legends acting face to face for the first and only time. Get with the program Oscar.

Kevin Spacey and the Script got some recognition but The Usual Suspects is another 1995 classic from when they knew how to make a film and not give away the twist ending in the trailer. A Best Picture nomination for the Usual Suspects would not have been out of line.

Another Classic. Se7en is David Fincher at his best, with peak Pitt and Freeman. Kevin Spacey swoops in during act III to put the cherry on top of a dark and disturbing crime/suspense thriller. They nominated a movie about a talking pig over Seven. Just sayin’.

This movie produced the often quoted on Atrainsports “John Doe has the upper hand!” line.

Just like Goodfellas should have won Best Picture in 1991, Casino needed to at least be nominated for the 1996 Academy Awards. Scorcese, DeNiro, Pesci, and Sharon Stone? C’mon man. James Woods plays an all-time great scumbag as well.

I’m not a Toy Story guy but nobody can deny that Toy Story has stood the test of time more than the other nominees. It spawned actually decent sequels launched Pixar. We even studied Toy Story in my screenwriting classes.

You could replace the 5 movies that got nominated with the five I just listed and nobody would think it a lesser list.

Other Great Movies of 1995 if not Best Picture Material:

12 Monkeys – Another great Pitt performance, Bruce Willis plays the leading role of a future convict sent back in time to gather information on the pre-apocalyptic USA.

Rob Roy – The Liam Neeson Braveheart of 1995, didn’t get the same press, a much smaller scale of a film.

Goldeneye – The Best Brosnan Bond Film by a mile. Led to an all-time great video game. Introduced a young ATrain to a young Famke Jansson.

Die Hard with a Vengence – The last great Die Hard Film the other being the original. 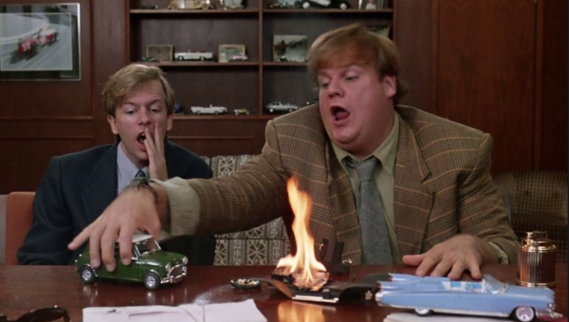 Tommy Boy – Farley at his best.

Empire Records – Cult classic for my generation, especially the ladies.

Crimson Tide – Drama on a submarine with Gene Hackman and Denzel.

Billy Madison – Not a Sandler guy, but it’s definitely a classic comedy at this point.

1995 had its share of absolute crap films that either missed the mark, had too much studio influence or were just plain bad. Here are some of the dregs of 1995.

The Net – The 1990’s had a lot of movies about fearing the internet before Hollywood had any grasp of what the internet was. Also, we are somehow expected to believe that 1995 Sandra Bullock has trouble meeting men. GTFO.

Congo – They tried to capitalize on the success of Jurassic Park by hastily bringing another Michael Criton book to the big screen. Amy Good Gorilla Congo Bad Movie.

Waterworld – Expensive flop, still I was I kid when I saw this and kinda liked it. Adult me knows it is hot garbage.

I could go down a bad rabbit hole all day but I gotta get this up before the Red Carpet show begins. A-Train OUT.

I know I am Leaving Deserving Films off this list 1995 was a great year.