Before we jump into the wildcard round of the NFL playoffs lets take a look at how things ended. 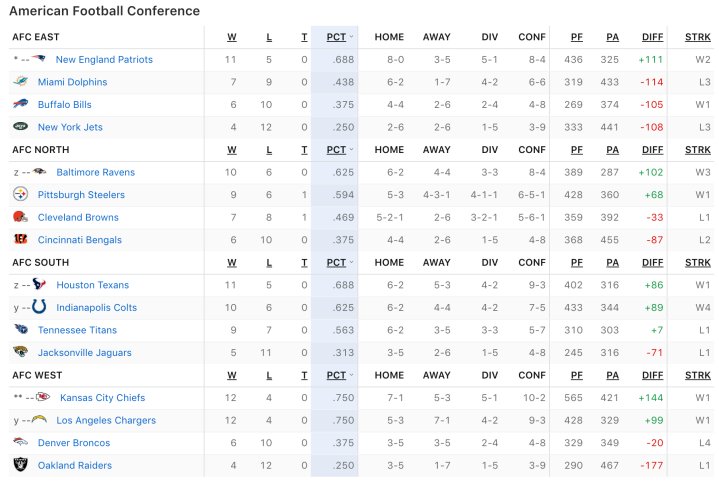 Alrighty let’s go back and look at some of our NFL pre-season prognostications:

I also wrote a Blog about Dez Bryant & what it means to be a “contender in the NFL.” 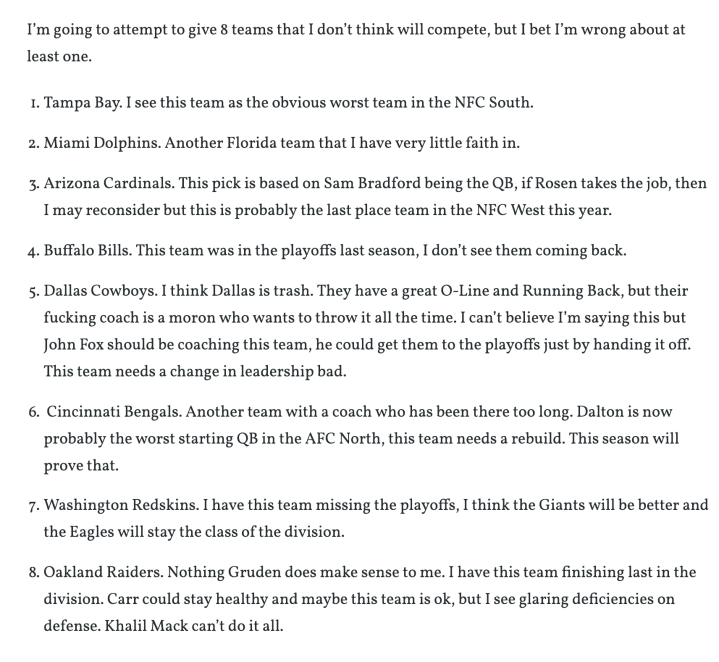 Where I was Nostradamus: Coaches fired in Tampa Bay, Miami, Arizona, Cincinnati. Also, I was 100% correct about Oakland (obv I made that pick pre-Khalil Mack trade), and Buffalo finished strong but they were trash all season.

Where I was mostly correct: Miami and Washington: neither team made the playoffs but Miami was better than I thought they would be. The Dolphins still fired Gase so that’s a win for the A-Train. Washington I faded because I just thought Philly was going to run away with that Division…which brings us to my big miss.

Where I was wrong: Dallas was the non-contender pick that I was most hesitant about. They have a good O-line and the fade of Dallas was basically an anti-Jason Garrett pro Eagles pick. Early on it looked like nobody in the NFC East was good, but both Dallas and Philly found some footing and made the playoffs. Trading for Amari Cooper helped.

Right about being wrong: Being wrong about Dallas highlighted what I was saying about predictions. Everyone thought the Jags were a contender and look at them now. Dez wanted to go to the Jags, that was one of his “contenders.” Jacksonville contended for the #1 overall draft choice but not much else. Dez Bryant never did find the contender that he was looking for, the Chiefs when they needed a WR signed Kelvin Benjamin. I think that means Dez is probably done.

I also blogged about some of the storylines heading into the NFL Season.

The first coach fired this season probably never should have been coaching at all. It’s unprecedented for a coach to go (0-16) and keep his job the next year but Hue managed it. This year he took a roster loaded with talent and mismanaged it to a degree I never thought possible. Then after he gets fired by one of God’s miracles the Bengals hire him on. But Hue is a mush and the Bengals season went down the toilet, they lost twice to the Browns, who showed the rest of the NFL that they didn’t stink, they were just weighed down by the cement shoes of a head coach they had.

Major Takeaways from the regular season.

Mahomes is the new alpha QB in the NFL from a statistical perspective and he’s just a joy to watch.

Having a good defense is more important than ever. You saw down the stretch teams that played consistent defense fared very well. Dallas, Baltimore, and Chicago all finished strong behind great defensive units.

Saquon Barkley is incredible but so are a lot of NFL running backs right now. We have seen a resurgence in the value of the RB position. The RB as a valuable pass catcher in modern offenses can’t be understated. Zeke Elliot showed that he’s more than just a ground and pound runner. Kamara creates all kinds of matchup problems for defenses and Todd Gurley is still a nightmare. The RB position feels as strong as it’s ever been.

That’s gonna do it for this blog, enjoy the games this weekend folks. GO BEARS!