Before we get down to business, please allow me to pump my own tires with that palindrome in the title – damn, it feels good to be back!

I was going to make this post about Burrow’s greatness and not focus entirely on OBJ, but ATrain already covered the first part. Let me be very clear – I’m writing this in order to ensure the narrative stays focused on the accomplishments of LSU and their legendarily fantastic quarterback. The Train said it best when he wrote “stats mean less without wins” (or something like that), Burrow managed to break / tie records both statistically and in the win column. And you know what? Thank God he did. He personified greatness in a time when our collective sports mind needed someone to do so. If he didn’t, who knows how college QBs would be discussed in 2020? Some putz on FS1, a million IG pages, and the youth of today might be arguing Colt Brennan’s 58 TD season was “greater” than Vince Young’s Rose Bowl winning one. I appreciate you, Joe Burrow. More than I can put into words.

Now…what I CAN put into words is my pure, unadulterated, and unquantifiable hatred of Odell Beckham, Jr. If you haven’t seen it already, here’s what that chump did in the face of his university’s beautiful moment last night:

LSU has already issued a statement saying it was prop money. You can find that here.

The author of the post I linked to above suggests that if you believe LSU, well, then you have to believe that OBJ went out and procured A LOT of fake money before this game. If you believe that, you’re in the same camp as those who believe LeBron was actually the official A&R for 2Chainz’s “Rap Or Go To The League” project (which means Bron spent hours with labels negotiating feature prices, typed all the lyrics into Rap Genius, and cleared every sample used on the album). I’ll be clear – if you’re in those camps, you’re a fucking idiot.

…ugh. I’m so fired up about this, rail riders. The fact that LSU had to officially address OBJ’s antics, not even twenty-four hours after their season of destiny, is beyond reprehensible! It is so disgusting not because OBJ broke NCAA rules that need to be broken, but because of the manner in which he decided to do so. Peel ’em off in the locker room, or at the club later, or today when they’re hungover and needing fuel for tonight, OBJ! But that’s not your style is it, dude? You needed to find your way into their spotlight, play the role of a “real one,” and cast a shadow over a beautiful moment that you had ZERO to do with. The only way you helped anyone last night was you gave us a reason as to why LeBron wouldn’t let you stay in his house.

I’m not about the cancel culture, people. I’m about second, third, and fourth chances if they’re layered with distinctly different intentions. I lose that empathy and sympathy when people continue to make the same mistakes over and over again. OBJ hasn’t changed, and he isn’t trying to in the slightest. Remember the boat trip?

OBJ and others did this before a playoff game. OBJ had a remarkably bad game following this ill advised journey, and he delivered this apology:

I believe he states that he has learned to not “take attention away from his teammates” or something along those lines. Whatever he says exactly, it can be paraphrased to suggest he’s gained humility, self awareness, and maturity from the experience. Guess what, rail riders? He fuckin’ hasn’t. Last night’s shenanigans show that OBJ still values his own grandiosity and arrogance more than all, and I doubt that will shift until his playing days start to dwindle. That will drive him towards a mindful post-retirement career (unlikely) or a very distasteful and highly publicized flame out (smart money is on this outcome).

Lastly, can you believe OBJ had the audacity to tell Burrow how to be a leader on IG? Peep this: 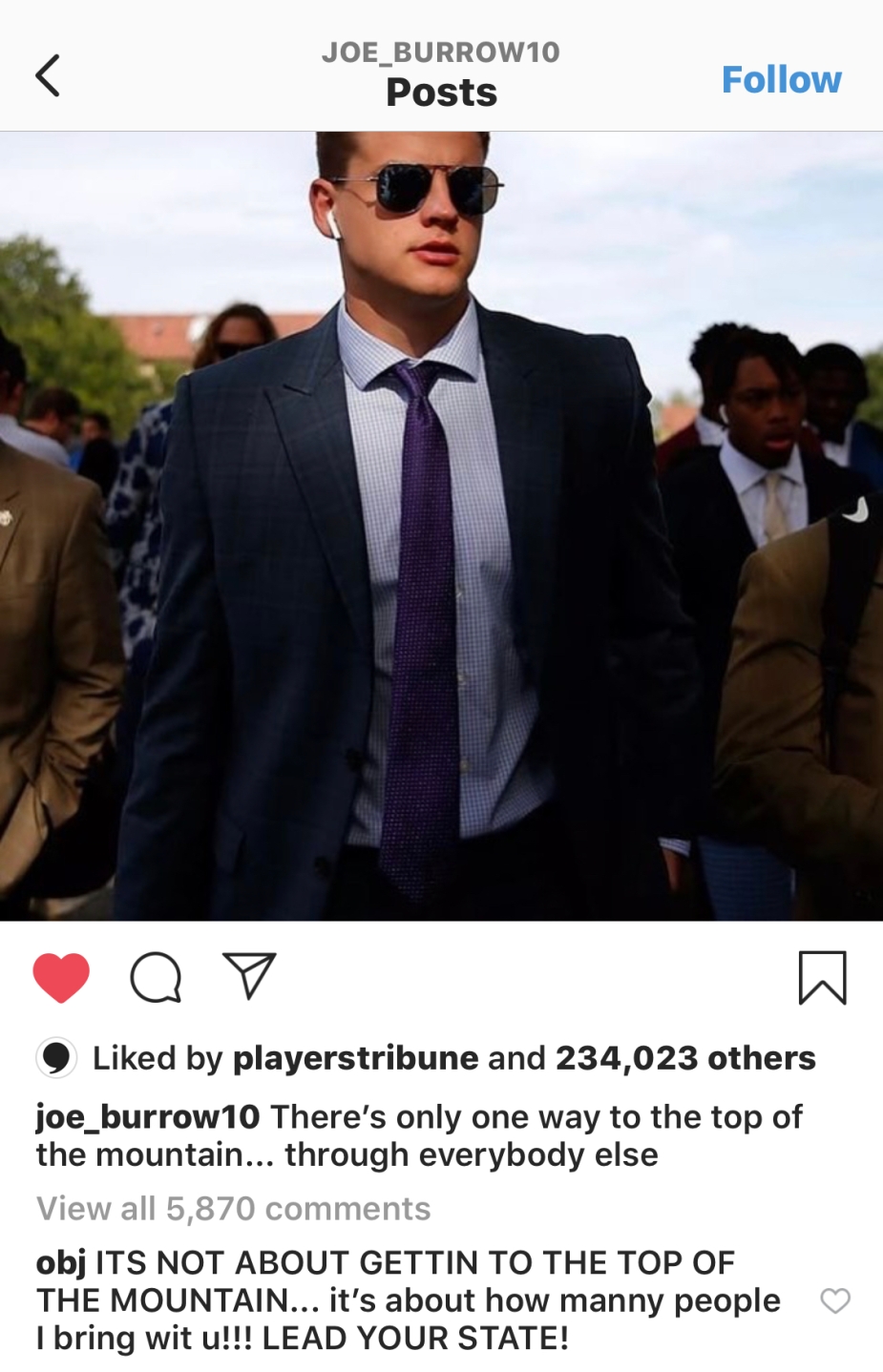 Um, Mr. Beckham? You spelled “many” wrong, and your sentiment is very far from reality. It most certainly is about getting to the top of the mountain, and Mr. Burrow most definitely lead the state school of his state in phenomenal fashion.

Congrats, Odell. You get the Jeru treatment, clown. Not only does your dogshit “guidance” have a paper trail, you once again got caught on video being a player who is only playin’ himself.